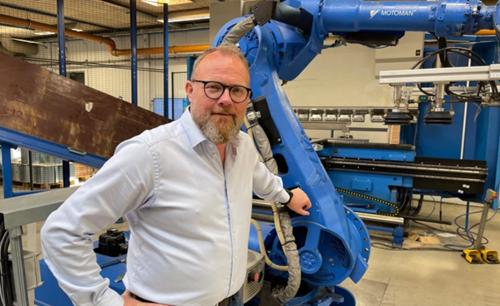 Published in the Danish trade magazine Maskinbladet on 25 August 2022:

SOBY focused on Ukraine - it's challenging, but the market is still promising


Two years ago, Søby, who is manufacturer of transport systems and solutions for handling, drying and aeration of grain, crops and much more, expanded their export activities and entered the Ukrainian market, where the company still see a huge potential despite current short-term challenges.

During the winter of 2020-2021 Søby established a professional organization through a Ukrainian dealer and was represented throughout the complete large country.

Things quickly accelerated, and already after 12-18 months in Ukraine the export to the country accounted for five percent of Søby’ s total turnover. Although the war in Ukraine has been challenging for Søby, the company continues to believe in a commercially favorable market in the long term.

- Before the war Ukraine only had a storage capacity for approx. 50 percent of the country’s harvest, which meant that a very quick shipment of a large part of the harvest, which then had to be sold at the current prices at any time. In addition, the storage conditions were miserable in many places, and a total loss of 20 percent of the total Ukrainian harvest was expected due to poor storage conditions, sales director Jan Lund says.

He says that even before the war, Ukraine was focused on these conditions and had ambitions to correct them. Subsidies were therefore introduced to encourage more storage capacity.

Reinforced demands
Therefore, it was obvious for Søby to contribute to the development with its products and know-how.

Jan Lund believes that the war has reinforced the need for good and sufficient storage conditions and thus also the need for Søby's solutions for handling, drying and aeration.

- We have focused and invested a lot in Ukraine, so after the initial shock about the war, which has also hurt the business, we now must decide what to do next, Jan Lund says.

But he believes without doubt that Ukraine at some point will be an exciting market for Søby once again.

- If Ukraine continues to exist – and we think so – there will be a huge demand for storage capacity, and we have everything which is needed when crops must go in and out of the warehouses, he says.

Still trade
He tells that, despite the war, Søby is still exporting to Ukraine, however in a significant lower pace.

- When the Russians withdrew from the Kiev area, our dealers became active again, and we are currently sending out some products, and there is also a need for service. We support whatever we can, says Jan Lund.

He notes that the western part of Ukraine has not recently been affected by the war to the same extent as the eastern part of the country, but of course things can change. The agricultural sector, and in particular grain production, constitutes a significant part of Ukraine's economy, which is why it is extremely important that the harvest is gathered, and the grain handled, even under conditions we cannot imagine.

Russia's invasion of Ukraine and trade embargo against Russia also affect Søby's business in Russia, but to a lesser extent.

In addition, before the war, Søby had smaller sales in some of the other countries around Russia, and according to Jan Lund, this slowed down due to logistical challenges after the outbreak of war.

Strategic bombing
- By now it is evident to everyone that Russia has gone strategically after the food supply and has therefore bombed grain warehouses and closed down harbours. We see bombed fields, set fires at fields, bombed grain warehouses and a bombed research centre. And the Russians have stolen field machines and driven them away on block trucks with police escort in Kharkiv. Of course, you must be careful about drawing conclusions from what you see, but it looks targeted, says Jan Lund.

He is convinced that the Russians want to shake the Western world by hitting the food supply, but also hitting the Ukrainian economy where it hurts the most.

- We risk having a shortage of food or that food will become very expensive, because Ukraine has the largest cultivated area in Europe and is the second largest grain producer after France and is therefore called Europe's pantry, says Jan Lund.

Poland
Even though grain is currently being shipped from individual Ukrainian harbours on the Black Sea, Jan Lund believes that it is necessary to look at alternatives to the traditional shipping via the Black Sea.

- Some storage possibilities for Ukrainian grain can be built up in Poland, and it will be commercially interesting for us because of our strong representation in Poland, he says.

Jan Lund states that Polish business has accelerated in the past few years, and that Søby is therefore on a good platform to seize the business opportunities that arise in the country.

He mentions that Søby is currently testing Australia and is also looking at opportunities in North and South America and has an eye on Spain and Italy.

Jan Lund says that Søby therefore has ongoing quarterly agreements with its steel suppliers, and a lot of steel has been bought, as the prices were at their peak only because they could get it Jan Lund.

- We use 12-14 tons of steel a day, and it's catastrophic if we don't react in time, because it's crucial with the supplies - otherwise we have no business. But it is of course a delicate balance between the price increases and what we must pay in the market, says Jan Lund.

He believes that it is necessary to adjust to navigating a very volatile market, because he considers that volatility is a new normal state.

- In the spring, a forecast said that we would have price increases of more than 50 percent in August, but now we are looking at price drops of 20-23 percent for steel, but at the same time the price of engines is increasing, which is still a challenge to obtain, says Jan Lund.

This means that Søby already reduced prices in June after a heavy increase in April.

This article is written by:

Welcome to SOBY
SOBY is a traditional, family-run company having developed and produced solutions for transport and aeration of grain and other crops for more than 60 years.


We have a staff of 45 competent, loyal and very experienced employees. They are doing their utmost every day for our dealers and their customers. Our solution is based on cooperation across the organization, which ensures that the customer comes first. We have a permanent staff all year round, so we ensure high professionalism and minimize errors. We have a good working climate, with a staff of passionate employees

What are you looking for?